Riley destroyed me in swimming

Riley is currently 14 and has been doing swim team for the last year.  I have also been swimming on and off since I am training for a sprint triathlon in September.  I felt like I was in pretty good shape.  I decided to take Riley with me this morning to swim.  Swim team stopped for the last few weeks so he hasn't been training.  We swam for 25 minutes.  He swam about a mile in that time and lapped me at least 4 times.  My first reaction was humiliation at being thoroughly beaten by my 14 year old son.  My second reaction was to think, "Well, it looks like all of that money for swim team is actually paying off."  Anyway, I guess it is in indication of how old I am.  I can still run faster than he can but who knows how long that will last.
Posted by Quintuplet Dad at 7:52 AM No comments:

Things that have happened lately

This will come as no surprise but one of the more difficult things I have found with dealing with quintuplets is time.  I really don't have a lot of it.  Unfortunately, I also have a lot of things I am involved in.  Over the past few years, I have been in several bands (as a drummer), I have taken up triathlons, and lately, have begun some extensive work on fixing up our house.

The house repairs needed to be done.  Quintuplets destroy things.  Anyone that has had us over for more than a few hours knows this. Our carpet (7 years old) is a complete disaster because we have had a bunch of kids running, walking, falling, and dropping stuff on it.  We replaced the lower level carpet with wood but the stairs were really bad so we decided to replace those with wood as well.  Because we are not rich, we are doing that ourselves which is a bit scary. 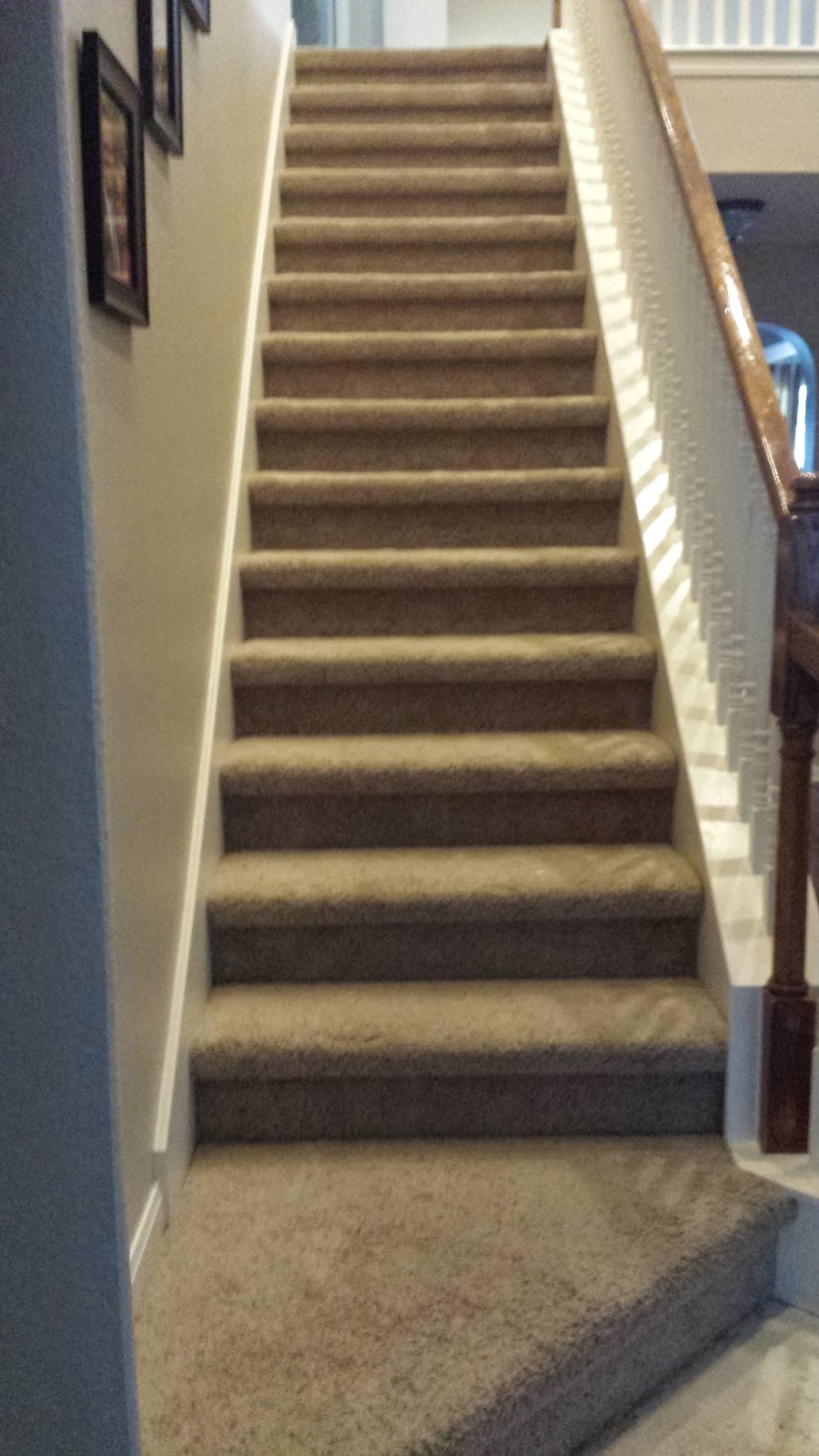 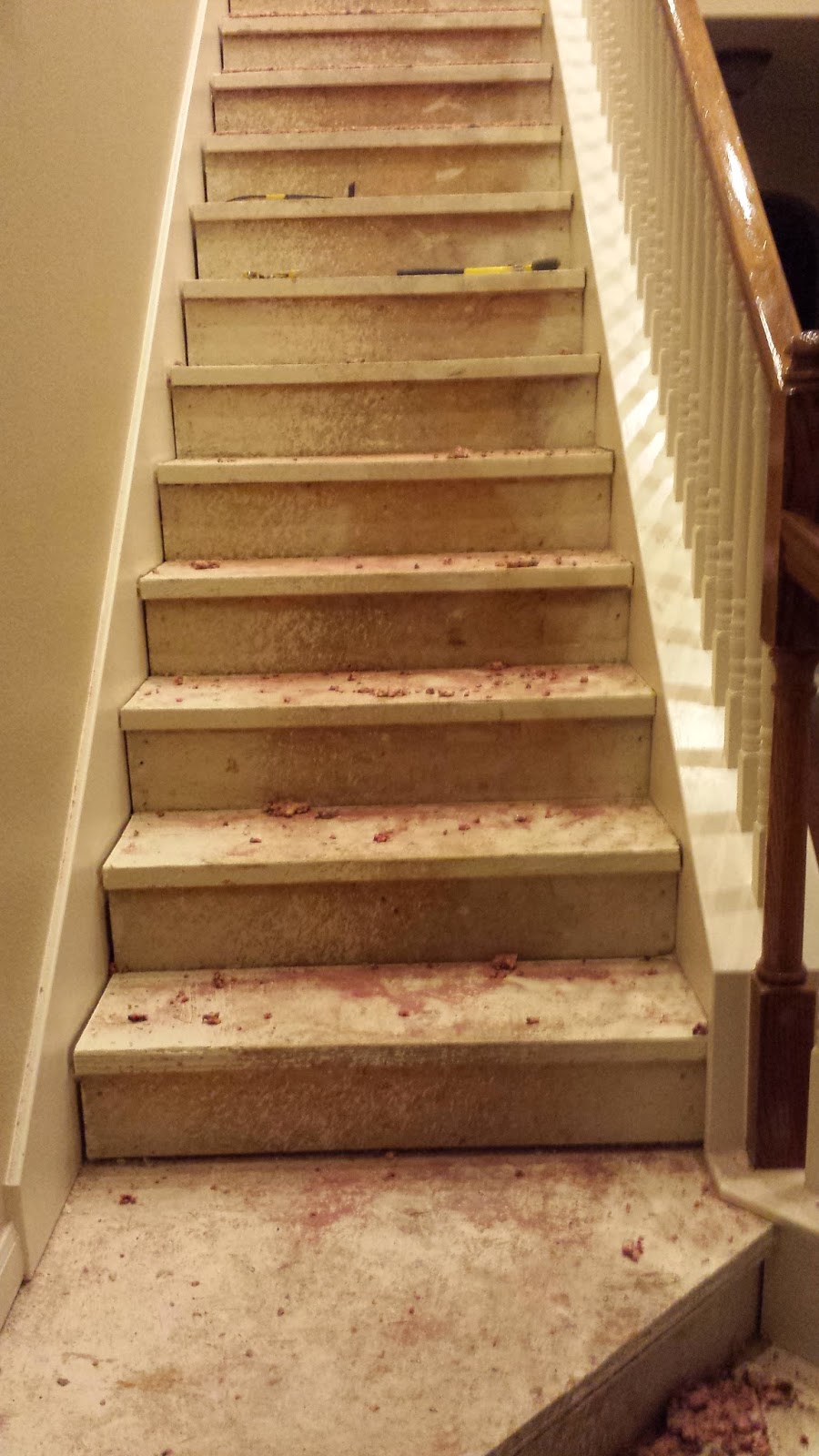 We are getting this stuff from Lowe's called Retrotread.  It looks fairly straightforward to do it except for that weird stair at the bottom.  I will have to do something special with that.  We will see how it goes...

With the triathlon stuff, I have been training fairly consistently and have found that it is a good motivation to keep in shape.  I lost about 15 pounds a few years ago and have not gained it back due to the triathlon stuff.  Feeling pretty good about myself, I decided earlier this week to have Riley, my 14 year old son, come with me to do a swim workout.  He is on a community club swim team and so we decided to follow one of his workouts.  First off, I am in pretty good shape but he completely smoked me in the pool.  It was humbling.  His workout was brutal.  It made me feel like the money we have put into having him (and all the other kids) do swim team was not wasted. 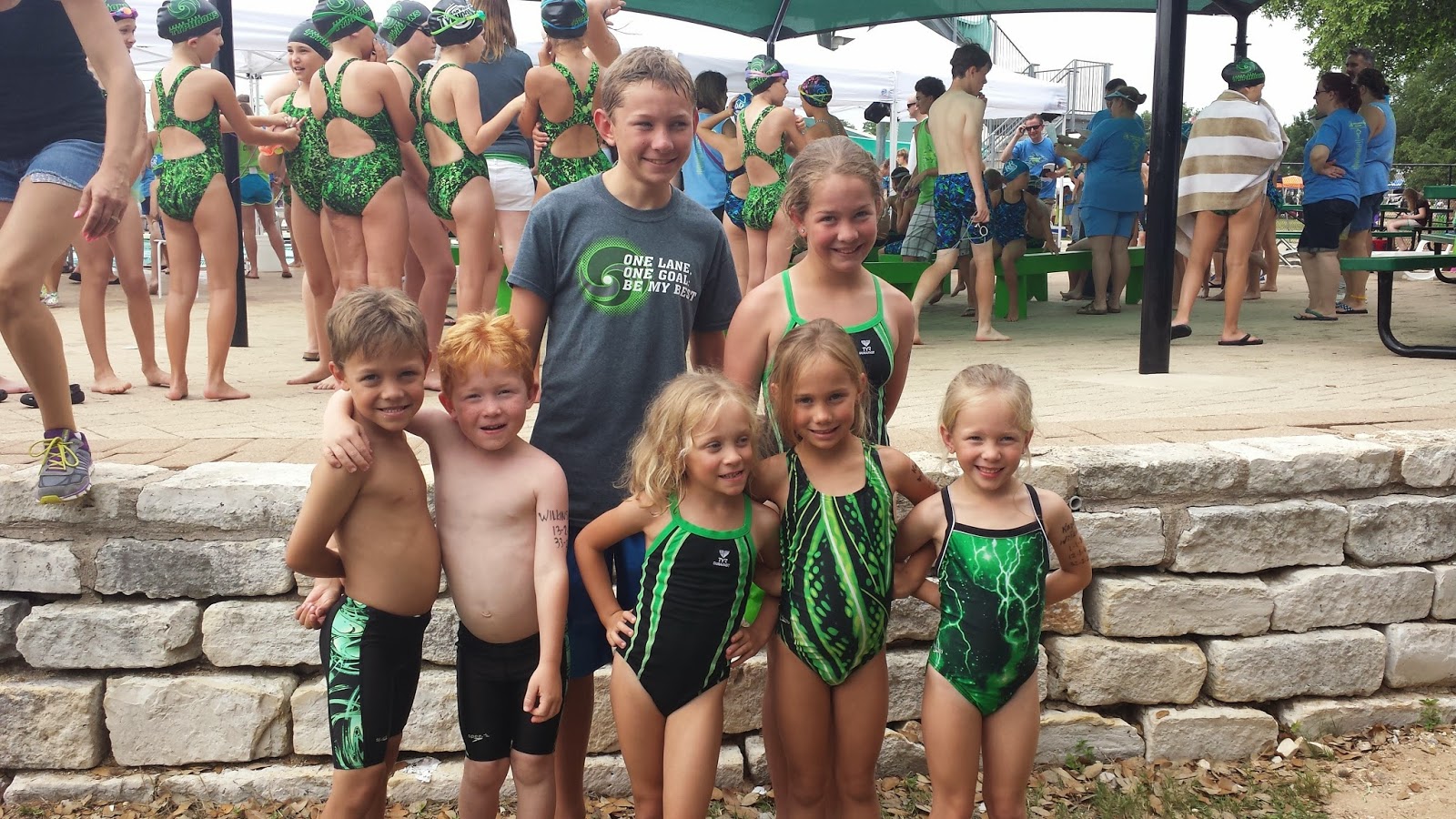 Something else that needed to be done was going and visiting family.  We recently went to Colorado and I decided to grow the beginnings of beard for the occasion: 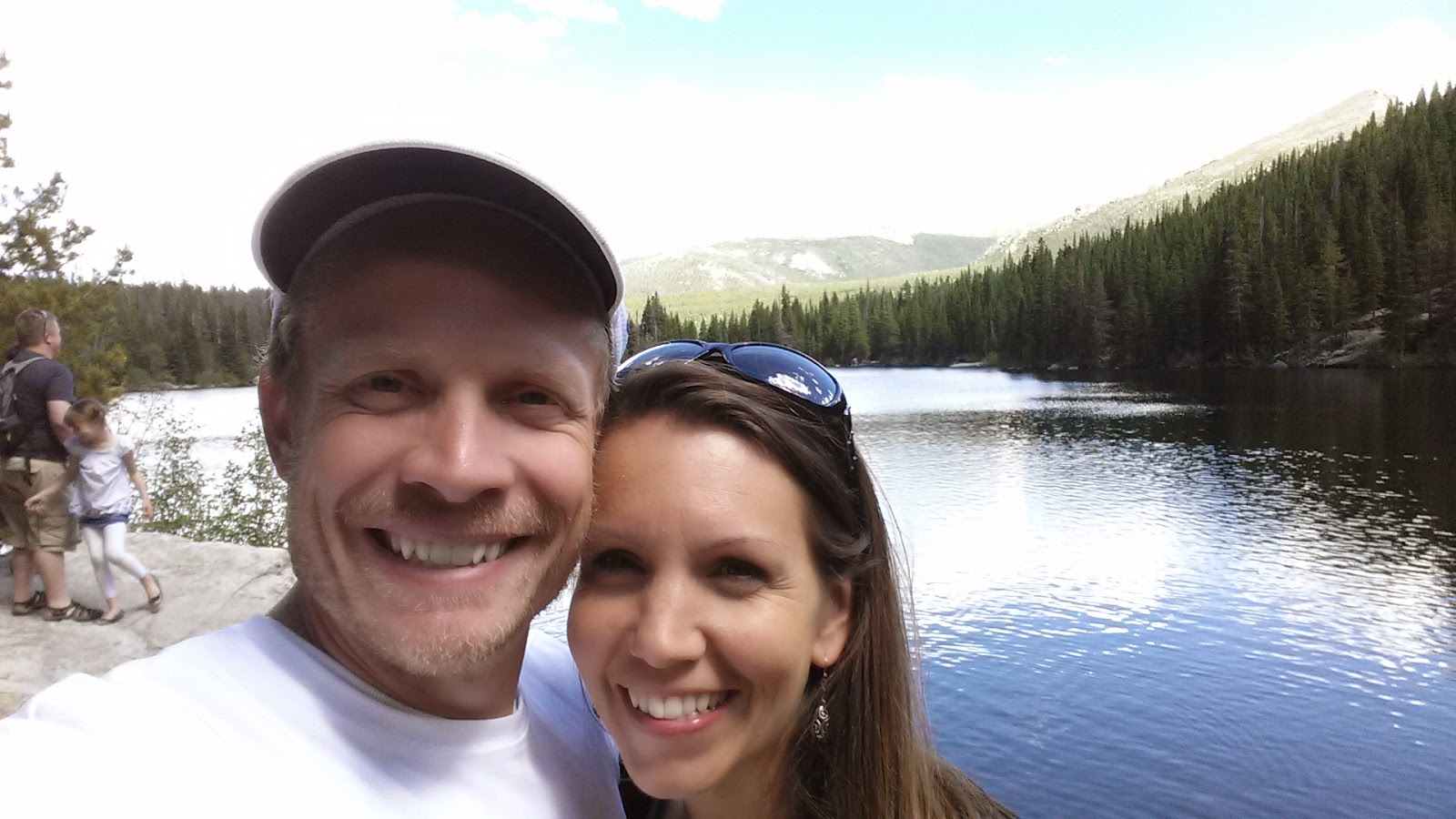 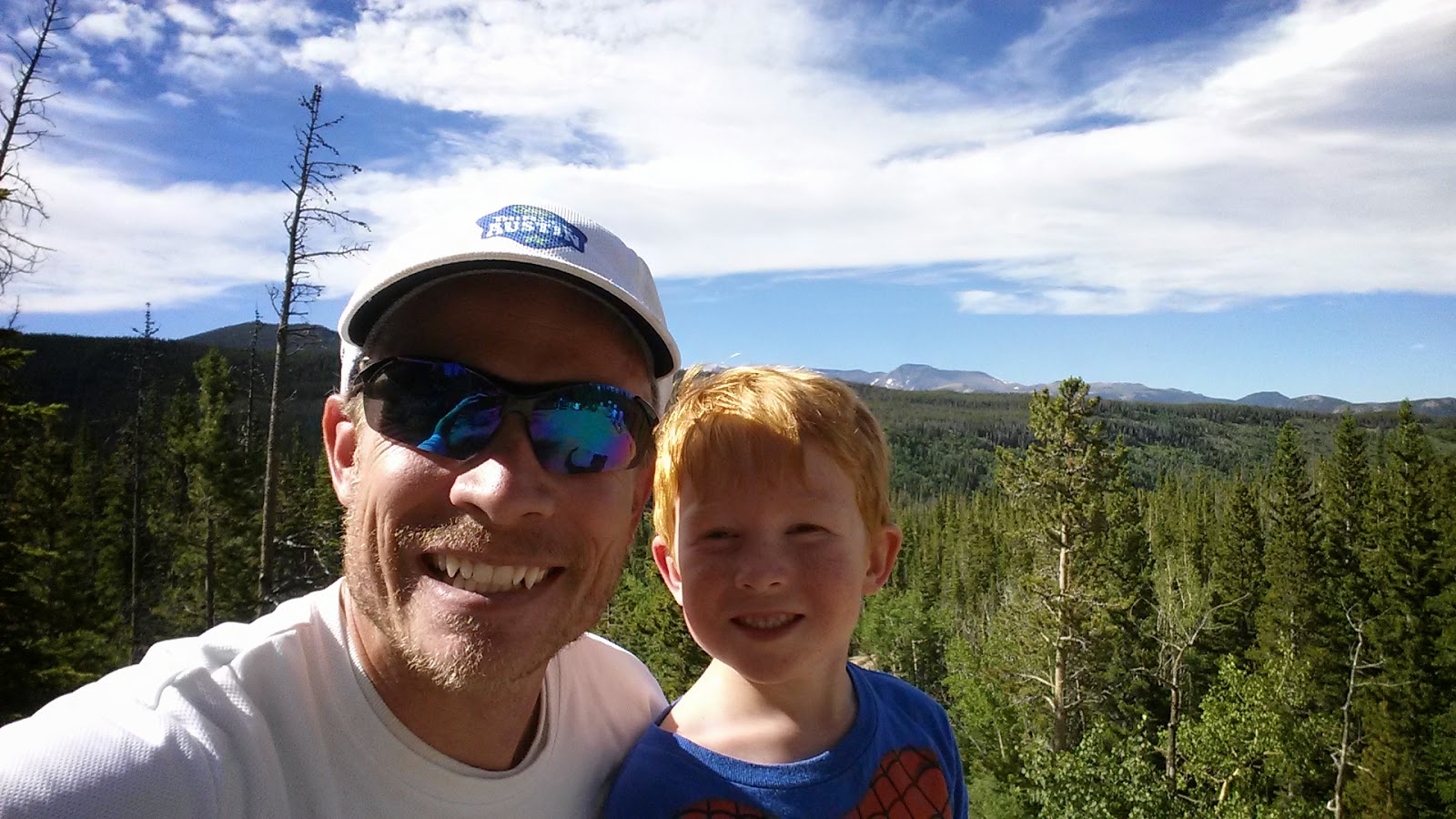 Bears are itchy but totally appropriate in the mountains.  I got rid of it once the novelty wore off.

Rachelle and I recently (yesterday) had our 17th anniversary.  We spent it eating hot dogs and pizza at Sam's Club with the kids: 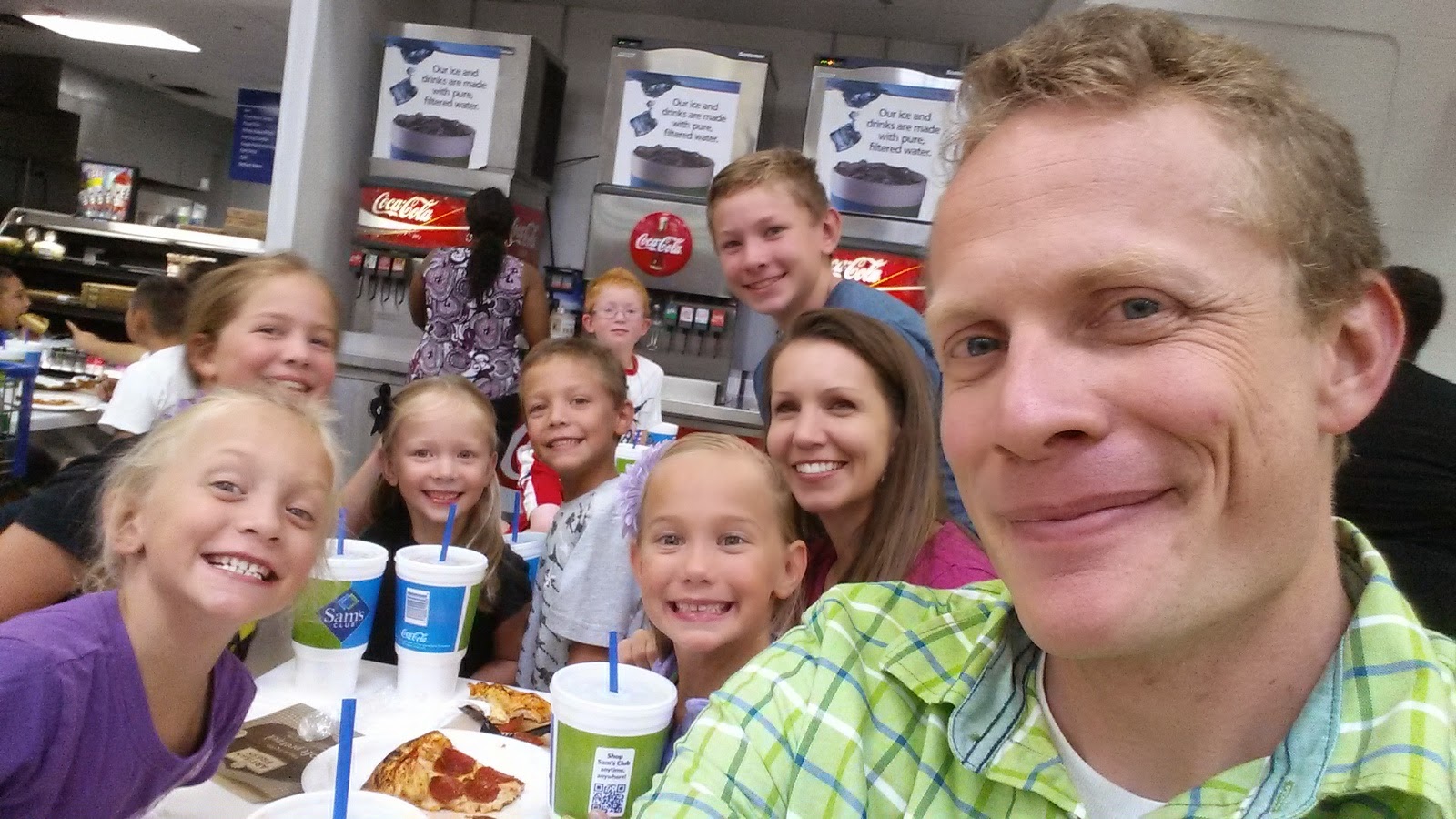 1.50 hot dog and a drink.  Can't beat that. Don't worry though, we are still going to do something a little more anniversary appropriate.  We are hoping to go to Cheesecake Factory and use one of the 1 billion gift cars we haven't had time to use.  Should be a good time.

Posted by Quintuplet Dad at 11:37 AM No comments:

This is our latest video, the Magic Words Rap about saying "please" and "Thank you". For some reason, this one took a really long time. I actually wrote the words in December of last year but just never got around to making it until now. Well, here it is:
Posted by Quintuplet Dad at 9:10 PM No comments:

OK, so it has been a really long time since I have posted anything. This is primarily because I have been really busy. Some time near the end of last year, I joined a band with some people from church. I play the drums. Well, at least I do now. I got myself an electronic drum set and worked on it fairly regularly. The only problem has been that because I didn't have any actual drum experience, I had to practice a lot which meant that I couldn't do much in the way of making videos or posting on my blog. In addition to that, I have also determined to get in better shape. Later this month, I am going to participate in the Cap Tex Triathlon with a bunch of my team mates from work. We are all doing the "First Tri" which is actually even shorter than the sprint Tri which is pretty short already. I got myself a bike off Craigslist and some clothes off Ebay and I am ready to go. This has also taken a decent amount of time. Rachelle has also been preparing for a marathon she is planning to run in June which has taken a bunch of time as well. I am posting again because I actually made a video for Mother's Day for Rachelle. I even play the drums on it. Anyway, here it is:
Posted by Quintuplet Dad at 9:22 PM No comments:

Our Latest Video: Clean It

For some time we have wanted to do a music video but the problem with those is that you have to have music. Normal music is copyrighted and so we can't legally use it. However, a month or so ago, I was looking through some fairly low cost Royalty Free music and came across a song that was very similar to one that I remembered from the 80's. The song was "Push It" from Salt N' Pepa which I remember as being a fairly "suggestive" song. Well, we re-wrote the lyrics, took out all of the suggestive stuff, recorded the vocal tracks in our closet, and then made a video to go along with it. In the end, it was a bit more work than I would like but was actually a lot of fun because it gave Rachelle and I a chance to be in the video which we don't normally get to do.

I have been feeling a little patriotic lately. Part of the reason is that I feel like I keep seeing people attacking the fundamentals of our country which makes me really nervous. Just this last week I read an article in Time Magazine questioning whether the constitution is still relevant. A week before that, I read something on CNN that suggested our constitution is out of date and we ought to follow Iceland's lead and have everybody help write a new constitution using Twitter and Facebook posts....yes, he was serious. Anyway, I don't think our Constitution is out of date and I really don't think having a bunch of random people posting on twitter would make it any better. I made a video today with my kids as a tribute to America and God's part in it's founding. A few weeks ago, NBC made a patriotic opener video to the US Open. In it, they said the pledge of Allegiance but left out the phrase "under God". This was silly of them and it felt like they were thumbing their nose at our country instead of honoring it. This is the video that I made:

How do you solve a problem like the Kyndall?

For the last few weeks, I have noticed a disturbing trend: no matter how hard we try, Kyndall can always find a way to get into trouble. Over just the last two weeks, I have seen some amazing things. About 14 days ago, she found some scissors and also some bags of skittles and cut them open eating at least one bag. We then put all of the scissors we could find on top of the fridge. The next day, she opened the drawer on the changing table and took out the Vasaline and rubbed it all over the wall. I think she also got Rustin and Ryder involved in that one. The only reason I was made aware of it was because she slipped on the stool she was using to get in to the drawer and ran by me crying but then wouldn't tell me why she was hurt.

On Easter Sunday Rachelle gave me a little Easter basket with some orange cream cadburry eggs. I put the basket in our closet thinking it was safe. I went in on Monday and found the basket nearly empty and some foil on the floor. I brought Kyndall in for questioning and at first she denied it but then went behind the place where Rachelle's pants hang and brought out a half-eaten orange creme egg. She looked surprised to find it there.

On Saturday, Kyndall took Rachelle's pink ipod nano. I searched for it all day but couldn't find it. I knew Kyndall had taken it and it was only late at night that she said, "Hmm...maybe it is in my bike." Sure enough, it was hidden in the seat of her tricycle.

Some time in the middle of the week last week, Kyndall got Rachelle's wedding ring. Rachelle looked all over for it and when she asked Kyndall, Kyndall said, "It isn't in my pocket". That was, of course, exactly where it was.

When Rachelle's mom came here last week, Kyndall got into her room, found some scissors and proceeded to cut up a bunch of bags of snacks she found in my mother-in-law's purse. This forced us to go get better locks for all of the doors since the child proof locks no longer work.

Last night at about 10:00 (the quints bedtime is at 7:30) I heard a glass breaking upstairs. I went up and found kyndall sitting on the bathroom counter with a shattered glass underneath her. She had been sneaking around upstairs and found this glass and somehow dropped it on the bathroom floor.

About an hour ago, I went up and found Kyndall sleeping on Kaiya's bed. I thought this was strange so I picked her up and when I went to put her on her own bed, I found that it was all wet. I checked her pants and found that it wasn't from her but then saw the spray bottle Rachelle uses to do everybody's hair. Kyndall had unscrewed the top and dumped it all on her bed.

She is pretty curious and she just can't seem to resist any temptation to get into trouble. I am just hoping we find a way to help her channel her "creativity" before she decides to find some more scissors and give everybody a hair cut.
Posted by Quintuplet Dad at 8:17 PM 6 comments: